Lists depending on answers to previous questions

Written by Moustafa
Updated over a week ago

You can read about regular lists here. Users are also able to create Dependent lists. This is useful if you want the answer of a previous question to trigger a new answer - so that, in effect, the answer to question A leads to answer B, and so on. For example, the selection of what language future contracts will be in will be dependent on the country of which the current agreement is based in.

To create a new Dependent List, click using the “+” button and tick the “Dependent” box. You will be able to see 2 columns, one named “Key” that will trigger the values of the list and the other one named “Values”. You can learn more about how Keys and Values interact below.

You can also make an existing List Dependent, by ticking the “Dependent” box. This will add a new column named “Key” that will trigger the existing values of the list.

To add in dependent list values one by one, click “+Add” and type in the key under the “key” column, this will be the specific answer chosen which will then lead to your dependent value appearing. Then you will have to type in the dependent value under the “value” column. Taking the example above, we can create a dependent list of various language options that future contracts will be based on the country which the current agreement is created in. As shown in the image below, for our example, the “key” will be Italy and the dependent “value” will be Italian. Therefore, if a user selects the country of the agreement to be Italy (key), the option Italian (value) will appear as a language option for all future contracts to be in. Note, to create multiple dependent options, simply repeat the key name and add in a different value.

This feature can also be used to add additional values after uploading a pre-existing list of dependent values from Microsoft Excel (note that only profile admins are able to edit organisation level lists. A profile-level user only can edit the profile-level lists).

Once completed, click “Update List” and if saved correctly, your value will appear. This feature can also be used to add additional values after uploading a pre-existing list of values from Microsoft Excel (note that only profile admins are able to edit organisation level lists. A profile-level user only can edit the profile-level lists).

To create a Dependent list from an excel file, go “Lists” page and select “Import” button. Since this feature also operates on a profile-level and an organisation-level, depending on what admin rights a user has, users are able to create a dependent list for various profiles and organisations.

To upload a list of values from Microsoft Excel, users can download the example import file found after you choose the “Import” button.

The excel file will have the following fields that you will need to update (highlighted in red in the image below):

Profile name: Add the name of the Profile here (B2).

Key: Add here all the applicable key. Only applicable for dependent lists (A6 and onwards).

Value: Add here all the applicable values (B6 and onwards). 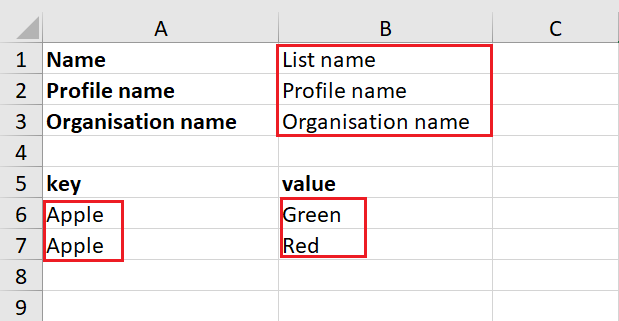 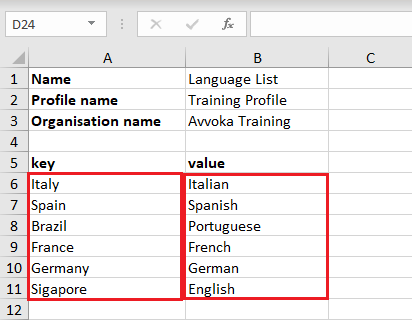 The image below demonstrates the interaction between the two lists – where selecting “France” in the “select list” question, triggers the answer “French” in the dependent list question.